Working at height forum in brief

Work Health and Safety Queensland (WHS Qld) ran a height safety forum during October, together with industry bodies and WorkSafe NSW. This brief report from Workplace Access & Safety provides an overview of the event for those who were unable to attend.

In response to a large number of incidents that had “the potential to be fatalities”, said Ray Billiet, WHS Qld:

Mr Billiet announced that forum attendees will be surveyed regarding whether the forum should be expanded to include issues.

a) Workplace manager/PCBU/body corporate is responsible for height safety systems.
b) Australian Standards are used as a benchmark for measuring safety.
c) Competence of installers and workers is key.

The two most common questions from workplace managers are:

1) How do I ensure the system I have installed is compliant?

2) Once installed, who is responsible for the system being compliant?

Mr Bailey says there is a duty to supply and maintain documentation under WHS and referred to Sections 22 to 25 of the WHS Act.

The PCBU needs to make sure that the installers and users can demonstrate competence (eg. evidence installers have had product-specific training).

“PCBU’s should ensure that any installation or upgrades to a system are only carried out by an appropriately licensed installer,” says Mr Bailey.

Although compliance with Australian Standards is not mandatory, they are used to assess safety in conjunction with legislation.

The workplace manager must ensure:
a. The system has been designed, installed and certified in accordance with relevant standards;
b. Documentation that relates to the system is supplied, maintained and available to anyone who uses the system;
c. Emergency rescue plans in place and operating before work;
d. System inspected and tested within the timeframe (6 or 12 months as applicable);
e. Competent are engaged to install the system and use it;
f. Exclusion zones are established during system use so people in the area not affected; and
g. Signage is appropriate.

1. Site visits indicated a serious issue
2. Access to and from systems is critical and often overlooked,
3. Design and layout of anchors must be done right.

WHS Qld carried out more than 300 inspections in 2014 focusing on the person in charge of the plant.

1. If it’s unsafe, say no
2. There are lots of recorded incidents,
3. The NSW program is in its early stages.
4. Human nature is to take short cuts.

Over the next 12 months, rope access users will be targeted, together with scaffold design and construction.

Mr Scott explained that working at height is often considered low risk but the consequences are severe. In the previous six weeks alone:
a. An arborist fell 15 metres.
b. There was a roof maintenance worker step through a skylight, fell 2.5m. Fatality.
c. An electrician fell 3m off a ladder. Fatality
d. There was a 1.5 metre scaffold that somebody fell through. Broke his back

These were all incidents where probably the risk is considered low, but the consequence still very high.
Mr Scott pointed to the responsibilities of installers and believes end users are not routinely trained to use the system or provided with documentation. 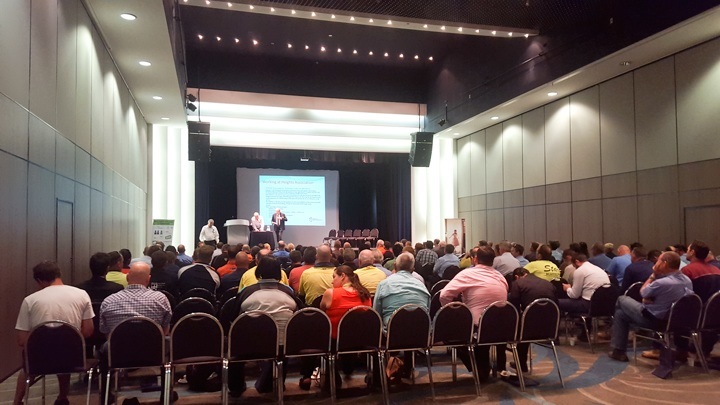 1. Industry needs to reform.
2. AS/NZS 5532 controversy has been good for industry.
3. Harnesses can be misused.

AS/NZS 5532 caused lots of controversy in the industry, which was great because people started thinking about anchors and asking questions. Manufacturers were trying to lower the bar for testing of anchors which created lots of dialogue.

Installation problems are common and many installers are unaware of the Australian Standards requirements. Mr Millar agreed that harness training is generally insufficient.

Mr Davies said documentation was often inadequate and reminded the forum that engineers must be able to verify that their designs are both practical and installed properly.
While acknowledging that Australian Standards are not mandated by Queensland legislation, Mr Davies said, “…we like people to comply with the Australian Standards as those Standards are modified as they show up to date knowledge and we want people to move towards compliance with the new Standards”.

Mr Davies reminded the forum to ask manufacturers if the anchor is suitable for the application rather than simply choosing the cheapest.

He also observed that screw bolts are increasingly being used as anchors. Mr Davies was concerned that their installation is difficult to assess. How was hole depth measured? What was the torque on the screw bolt once installed?

Mr Davis gave an example of observing an installed anchor. Same type, same brand; visually it was obvious that they weren’t installed the same because different amounts of fastener were exposed.

Workplace Access & Safety are the market leading height safety experts and are dedicated to building a general awareness of this highly specialised area of risk.

Our true end-to-end height safety solution covers all your needs from consultation to system design, equipment install and ongoing training and inspections. We ensure the right system for your needs and ongoing peace of mind.

Workplace Access & Safety is independently accredited by NATA™ to perform fall prevention inspections and has a NATA-accredited laboratory to perform testing of AS1657 equipment and AS/NZS 5532 safety anchors.

Connect with us on